Watch and listen to Ann McKitrick answer several questions that evolve around feeding your newborn baby.

How Much is Too Much?

One thing that new parents are pretty concerned about, and I hear a lot of questions about is how do you know if your child is getting enough to eat? How do you know if that little baby is taking in enough formula in order to get what they need nutritionally to grow? And so I thought it might be kind of good just to talk about that and put your mind at ease here and let you know what your baby needs exactly so that it gives you some guidelines to follow.

One way of looking at it is that your stomach is about as big as your fist. If you look at your tiny baby’s fist, that little hand is about the size of their stomach. As you can see, they can only hold a teeny little bit at any given time in order to fill their tummy. If it gets too full, it’s just going to come right back up. Your newborn baby has a very tiny stomach. We’ll look at how many ounces and what it looks like. Take your baby’s weight and multiply it by about two and a half to get the number of ounces that they need per day. That would mean that an eight pound baby would need about 20 ounces a day of milk or breast milk, formula or breast milk.

Formula and breast milk both have an average of around 20 calories an ounce which means that an eight pound baby would need approximately 400 calories a day. That’s kind of a baseline for you to kind of know about and go on. Of course, if you’re nursing, you don’t know how many ounces your baby’s getting with each nursing. You would use some other ways of measuring whether or not they’re getting full there. 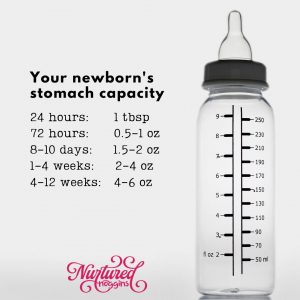 When your baby is one day old, their stomach can only take one tablespoon of formula at a time. let’s look at how much that is. So here is a tablespoon of milk. That’s all they can manage at any given feeding. That is about a half of an ounce. In order to get… if your baby weighed eight pounds at birth, they would need to have 20 ounces. That’s a lot of feedings. This means that they’re going to need a lot of bottles or a lot of nursings in order to get that. This is one day, this is a half an ounce.

By three days, they need to go up an ounce. They would need 20 of these throughout the day to get the food that they need. By 8 to 10 days, about one and a half to two ounces, and then from one week to one month, they need about two to four ounces at a time. At one to three months, it’s four to six ounces at a time.

Every time you’re making formula bottles, initially you might just make one ounce at a time and see how much they take. Then you might bump it up to one and a half ounces and then bump it up to two ounces. When your baby gets to be maybe a week or two old, go ahead and make two ounces. You can always make more and give that to them, but you don’t want to overfeed your baby.

When you are feeding your baby, these would be some good parameters to look at as you are considering the amount of formula that you need to buy and prepare in advance or to prepare before you feed them. With newborns, we always want them to determine when they need to be fed. They are not on any schedule initially. They’re used to being fed and filled all the time in the womb. They have to figure out this whole idea of being full and communicating to you that they need to take it. They have to work out the process of taking in the milk, and that whole latch on process with nursing takes a little bit of time to work out in the first 10 to 14 days.

Cluster feeding is very common with newborns. They might go a pretty long stretch, and you’re thinking, oh no, I need to feed my baby. It will all even out and work out. Probably by the end of the first month, your baby will probably be on a pretty good routine, not all of them, but a lot of them will be, and you will be able to kind of predict when they’ll need to eat.

So there you go. Feed your baby when they’re hungry in the first… well, for always… but in the first four to six weeks of life, you want to just really follow them, follow their cues and learn from them what their body needs. Okay, I hope that helps.